You are here: Home / TRAVEL / ALL TRAVEL POSTS / Travel Diary: New York City (Part 2)
*This post may contain affiliate links, which means I may receive a small commission, at no cost to you, if you make a purchase through a link. I really appreciate your support!*

We woke up to a bright and sunny Saturday morning which was a welcome change from the rainy night before (in case you missed it, I talked about my first night in New York City here). After crowdsourcing a local bagel spot recommendation, we headed out on our first adventure of the day. We stepped out into the crisp air and made our way to Ess-a-Bagel‘s Midtown location… what we hadn’t anticipated was the line of customers that ran out of the store and down the block. We were willing to stick it out for a tasty bagel, but I have to admit that we honestly considered abandoning our spot in the line a few times because we were SO hungry! Ess-a-Bagel did not disappoint; our bagels & schmear were totally worth the hour that we waited (Warning: if you’re short on time or getting hangry, this is probably not the place for you). My husband ordered the Everything bagel with Plain cream cheese and a drip coffee and I ordered a Salt bagel with Scallion cream cheese and an iced coffee — we were SUPER impressed with the bagels, but the coffee was kinda… meh. I recommend getting your caffeine fix from a dedicated coffee shop for your wait in line for a tasty bagel! (another Ess-a top tip: if you aren’t ordering a breakfast sandwich or are getting a “cream cheese sandwich”, but don’t need your bagel to be toasted, you can cut the long line and hop in to the Express line via the entrance door on the right!)

After thoroughly enjoying our bagels, we walked up to explore Central Park. The ice skating rink was already installed and there were so many people enjoying themselves out on the ice. What a fun way to spend an hour or two! We only got about halfway through the park (I’m bummed that we didn’t make it to The Metropolitan Museum of Art this time), but we got to see the Balto statue, the Carousel, the Bethesda Terrace/Fountain and the cutest little gazebo (Ladies Pavilion in The Ramble) looking out at The Lake. The autumn foliage was still in full effect so we had the most beautiful canopy overhead and a crunchy carpet of fallen leaves. We stopped and sat on a few benches throughout to just take it all in — I also adore the lamp posts peppered throughout the park. So charming!

On our way back down, we stopped at The Plaza Hotel for drinks since it’s just at the edge of Central Park and we had about an hour to kill before our next adventure. My husband really wanted to visit The Oak Room since he had had such a wonderful experience there ~6 years prior, but according to a hotel employee it’s been closed for nearly that long due to a leasing issue. Instead, we were welcomed into The Champagne Bar (which, admittedly, is way more up my alley).

We decided to share a bottle of 2007 Taittinger Brut la Francaise which was delightfully light and crisp, which was accompanied by some bar snacks that included: truffle popcorn, a variety of herbed nuts, and shards of dark chocolate that had a little heat from chilies and a few pepitas sprinkled in for texture. It was such a yummy snack to hold us over until dinner!I had made reservations for us to go to the Top of the Rock at Rockefeller Center for just before sunset so we walked a few more blocks to get a view of the city from the 70th floor! Well, actually there are 3 levels of observation deck: the 68th and 69th have glass walls and the 70th does not! Of course I got photos on every floor, but made sure that I was on the top floor for the actual sun setting. The entire city was just aglow and it was the most spectacular view that completely took my breath away! (That and it was cold and CRAZY WINDY up there… I have a few super cute outtakes of my crazy hair swirling around my head. lol)

After watching the sun set, we did a little shopping. My new favorite brand, Sèzane, has opened one American store in (of course) New York City so naturally we had to pay it a visit. I admit that I did not leave empty-handed, but I restricted myself to one item (which was challenging because I honestly wanted one of everything!).

Next, we hustled through Chinatown to find Best Made Co., a company that my husband has been interested in for quite some time now. We perused the cool shop, and he located the beautiful primary red pullover jac-shirt that he’s been eyeballing online for a long time. After seeing it in person and finding his correct size, pulled the trigger on his purchase.

We ended up making it to our dinner reservation in NoHo about 45 min too early, so we popped down the street to a cocktail bar called Wren. We loved the vibe and decor, and our drinks were delicious! We’ll definitely be back.

Our dinner reservations that night were at Bar Primi, an adorable Italian spot that we had arguably one of our favorite meals ever. We started with the brussels sprouts appetizer, then shared the burrata, to follow, we each ordered our own pasta dish: I had their seasonal special which was a pumpkin ravioli (Y.U.M.) and my husband ordered the penne ragu alla bolognese.

We decided that we needed dessert to top off this delicious meal and I insisted on tiramisu if it was on the menu (it was), but my husband really wanted to try the Nutella sundae… they were both so scrumptious!!! We basically had to roll ourselves out of there because we had stuffed ourselves with such great food. lol!

It had been such a tremendous day that I didn’t want it to end. It was hard to believe that our time in the city was nearly over…

Sunday’s weather was just as beautiful as Saturday’s had been, so we promptly showered, packed our things, checked out out of the Roosevelt Hotel, dropped our bags off with the front desk and hailed a cab to travel down to the Staten Island Ferry. Although there were plenty of tour boats that got much closer then the ferry did, we opted for the free version and still got some satisfactory shots (even if they were from a distance). I was starving by the time we arrived at the Ferry Terminal so I snagged a breakfast bagel and an iced coffee from a little bodega inside the Terminal and it was SO GOOD. I watched the attendant actually crack the egg, scramble and cook it right in front of me! Doesn’t get much fresher than that! I had finished eating it as our ferry made port. We then made our way to the right (starboard) second story outdoor deck area for snapping the best photos, along with 60 other people that had the exact same idea. As we set off, we quickly realized that it was going to be a cold and windy adventure.

A daring seagull in search of unattended food made a few passes by our deck and accompanied us almost all the way to Liberty Island. And then all of a sudden, there she was… Lady Liberty in all of her glory. The monument was so beautiful to behold, even from afar. I was overcome with emotion and had to fight back tears as I admired our monument symbolizing freedom in America. Our ferry back to the city was an older model and had no outdoor decks — everything was enclosed. Please consider this when deciding which ferry to take… it was a happy accident that our first ferry had been a new model with outdoor space for optimal photo opportunities. You can check out the different ferry boats here.

To warm up, we popped into a historic pub near the ferry terminal called Fraunces Tavern. Fraunces is the oldest tavern in New York City, so naturally we had to check it out. We grabbed a bite to eat before we had to make our way back to our hotel to grab our bags. My husband ordered fish and chips (of course) and I ordered a seasonal chicken salad to hold us over until we arrived home. The food at Fraunces was mediocre; I wouldn’t say it was necessarily bad, but I also wouldn’t add it to a “MUST EAT” list. Apparently there is a portion of the building which is a museum which I think is worth the visit, but I would definitely suggest moving on for your meal.

After our lunch, we went back to our hotel to grab our bags and then headed to the airport. What a whirlwind weekend! Such an amazing first visit to New York City — I can’t wait to return and explore some more.

What are your favorite NYC spots that you think I should check out on my next trip?

free goodies straight to your inbox 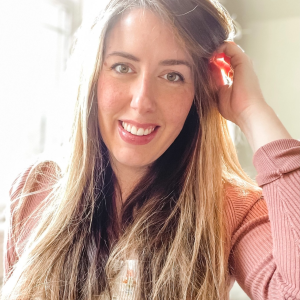 
Beyond grateful for our little family — wishing

Stay up to date

Stay up to date with the latest

Beyond grateful for our little family — wishing